How much is it?

Are you a budding musician, sound tech, lighting engineer, film maker or just interested in breaking into the music and creative industries?

Successful artists and creative experts will chat candidly about their journeys into and through the music and creative sectors, offering you insights and tales of how the industry really works, answering any of your burning questions, providing state-of-the-art studio tours and performing live.

Join us for all or part of this exciting event!

5pm to 7pm – industry talks from recording artists, Q&A, panel and live performances.  Finished off with a talk from the head of the vegetarian society and showcase of a short film.

Heidi Lewis – Welsh singing sensation from The Voice currently working on her own material for her debut album.

Pre-Screening of KIDDO short horror film premiering with ALTER on the 29th Dec. KIDDO creator and critically acclaimed Kitten Pyramid artist Scott Milligan explains his journey making both the album and short film. Scott will be joined by record producer and Kitten Pyramid band member Nick Brine along with the CEO of the Vegetarian Society, Richard McIlwain.

Sign up here or email GarethD@BusinessinFocus.co.uk to register your interest. 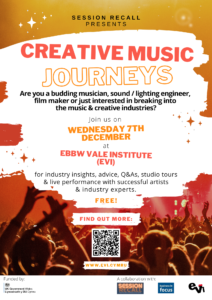 All our upcoming classes

PAST EVENT: 12 Days Of Christmas: An EVI Choir Concert

PAST EVENT: Miracle on 34th Street

£39.50 per person (including your own wreath, mulled wine and mince pies)

Industrial Dreams: Voices from industry erased – resistance and archive in Ebbw Vale and the Ukrainian East